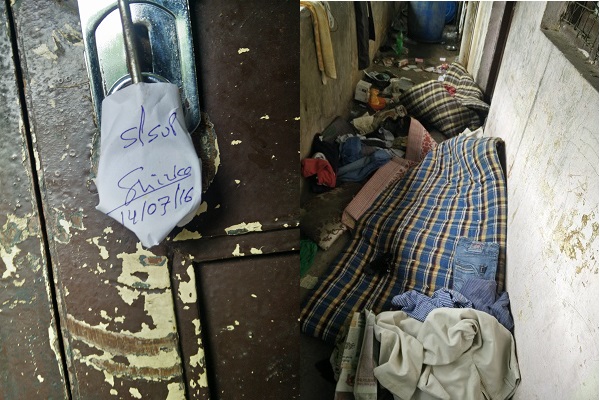 IN a very shocking incident, a civil contractor managed to encroach on defence colony flats and rent these to Bangladeshi nationals. Though defence authorities vacated the flats last week, they did not take strict action on the contactor or the security personnel of the colony.

The matter pertains to the Naval Civilian Housing (NCH) Colony, Kanjur Marg (West), in suburban east Mumbai. There are more than 1,500 quarters in the colony where the residents range from the rank of Commander to peon.

Sources said on July 14, 2016, general manager, HR, western naval command (WNC), ordered Commander MHA Muzawar to remove certain persons and vacate three flats in ‘U’ building. Commander Muzawar handed over the resposibility to security supervisor Shiva. Shiva immediately got acting and removed the persons from the flats. He threw their belongings from the flats, seized the construction material, loaded in three tempos and sealed the flats.

ABI is in possession of a video clip of the belongings which were thrown out. Whisky bottles were also found in the flats. Later Commander Muzawar reported to GM HR that the flats had been emptied of the encroachers.

Defence sources told ABI that a civil contractor who had befriended security officials, mainly Commander Muzawar and Gopal Kumar, encroached on the three flats. He rented workers (few Bangladeshis) and put building materials there. In exchange, he bribed security personnel Gopal Kumar and Muzawar. While Security supervisor Shiva was vacating the flats, Gopal Kumar, Rajesh Kelshekar and the contractor appeared there and tried to interrupt the action.

The colony residents are shocked to hear this. They are also shocked that after removing the encroachers no action has been taken on contractor or Mujawar, Commander and security in-charge of colony. An FIR should be registered at the police station and an inquiry should be initiated in the matter.

I lived there at NCH colony for 2 years..the security system is highly vulnerable ..senior officers reside belonging to various stratas of government as well as Navy..

Its quite appaling that..rented to outsiders..where as good people crave for good living in sub urbs