Home Others Commissioning of ICGS Aporva and C-421 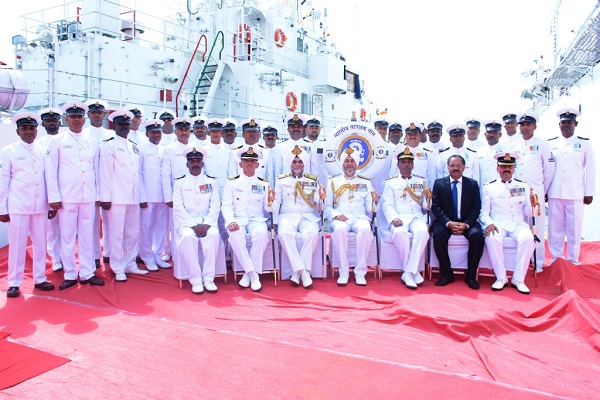 ICGS Apoorva and C-421 have been designed and built by M/s Cochin Shipyard Limited and L&T Limited, Surat respectively. ICGS Apoorva, 14th in the series of 20, is a 50 meter long Fast Patrol Vessel that displaces 317 Tonnes and can achieve a maximum speed of 33 knots. The ship is commanded by Commandant (JG) Dinesh Dogra with a complement of 05 officers and 34 ranks. She is equipped with state-of-the-art weaponry, advanced communication and navigational equipment that make her an ideal platform for undertaking multifarious close-coast surveillance, interdiction, search & rescue and medical evacuation missions. The ship, Apoorva, synonyms with ‘unparalleled’, will be based at Goa under the administrative and operational control of the Commander, Coast Guard District Headquarters No. 11. The ship is being commissioned over one month ahead of schedule.

ICGS C-421 is an Interceptor Boat with 27.8 meter length and displaces 106 Tonnes. The ship is commanded by Deputy Commandant Rohit Kulkarni with a complement of one officer and 13 ranks. C-421 is a water jet propelled vessel, 27th in the series of IBs constructed by L & T Limited and can achieve a maximum speed of 45 Knots. The ship is being commissioned nearly two years ahead of schedule. Fitted with medium range armaments, the ship is designed for close coast and shallow water operations. The vessel is based at Androth (L&M Islands), under the administrative and operational control of the Commander, Coast Guard District Headquarters No. 12.

The ADG SPS Basra in his address acclaimed the efforts of all concerned agencies, by way of proactive interaction and co-operation, in achieving the common goal of maritime and national security. The Flag Officer assured the commitment of the Indian Coast Guard in synergizing maritime operations along with all stakeholders to achieve the overall objectives.