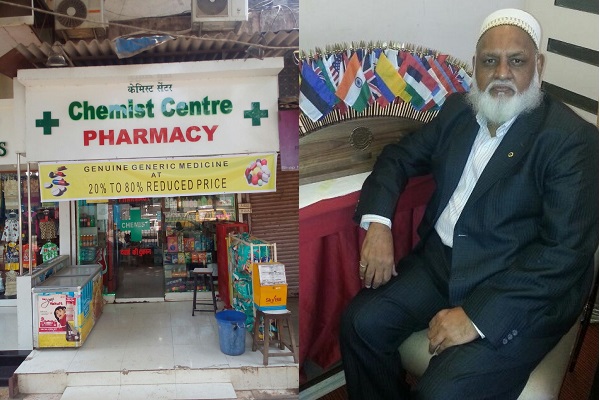 As numerous violations come to fore, one-time overlord of pharma trade and extra-constitutional raid master gets taste of own medicine

The Mumbai Vice-President of Bhrastachar Virodhi Samajik Nyay Manch, Bharat Sarage, on September 7, 2013, complained (copy with ABI) against Kapasi’s medical store and pointed out a lot of irregularities. Of course, nothing happened as Zagade was the FDA chief at the time. On April 30 this year, Dr Ved Tiwari, Vice President of Maharashtra Navnirman Sena student wing, also complained (copy with ABI) against Chemist Centre. According to Tiwari’s complaint:

1- Chemist Centre was selling Schedule-H drugs (steroids, antibiotics, and cough syrup) without prescription. Tiwari submitted four bills.
2- Pharmacist’s signature was different on each of the cash memos.
3- Drug licence validity was not mentioned on cash memos.
4- Name of manufacturing companies was incomplete and wrongly mentioned.
5- Chemist and druggist were not mentioned on display board and cash memo.

“Apart from the absence of pharmacists, there were discrepancies in the purchase and sale records and medicine sale was happening without prescriptions from registered medical practitioners. All these are grave violations, hence we complained to the FDA,” said Tiwari.

On June 10, drug inspector R P Chaudhary visited the medical store and subsequently submitted a report to the department. On the basis of Chaudhari’s inspection report, the department issued a show-cause notice to Kapasi. On August 8, Kapasi replied to the FDA. On December 3, Kapasi presented his side before FDA officials and Assistant Commissioner, Zone-4/5, Pravin Mundada recorded his statement. Mundada was not satisfied with Kapasi’s clarification and issued the suspension order.

While Kapasi’s licence going may seem like one small piece of action when seen alongside the cancellation of 3,000 store licences by the FDA all over Maharashtra, it is important to note that it set of a feeling of relief and poetic justice among owners of hundreds of medical stores as they were all fed up with the attitude shown by Kapasi. When Mahesh Zagade was FDA commissioner, Kapasi had struck terror in the heart of chemists. For reasons best known to him, Zagade was always found doing Kapasi’s bidding.

Sources from the medical field told ABI that there were three associations, the Maharashtra State Chemist and Druggist Association (MSCDA), the Retail and Dispensing Chemists Association (RDCA) and the Pharmaceuticals Wholesalers Association (PWA), that once lorded over the medicine business. If any manufacturing company launched its medicines, an NOC of sorts had to be obtained from these associations. Before opening any medical shop, whether retail or one of a distributor, it was “mandatory” to take an NOC from the MSCDA, the RDCA and the PWA. Zagade broke this monopoly, but he inexplicably allowed Kapasi to fill their shoes and exercise the powers the three associations had enjoyed.

Kapasi soon began acting like an FDA commissioner; he used to order FDA officials around. The FDA officials were fed up with the attitude Kapasi was throwing all around. Before raids on medical stores, Kapasi would inform the media and even issue the official statement on behalf of Zagade.

“We are very happy with this action against Kapasi now. We are thankful to Pravin Mundada,” said an FDA officer on condition of anonymity. Kapasi said he did not know of any licence suspension. “I have not received any suspension notice yet. You (ABI) are giving information to me,” said Kapasi.