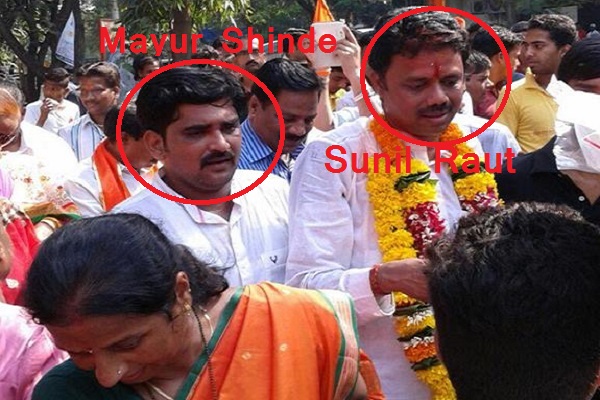 IN shocking proof that the gangster and the politician share bhai-bhai ties, a gangster named Prasad Pujari has lent his muscle to Shiv Sena MLA Sunil Raut.

Gangster Pujari threatened a complainant and told him he should not “harass” the hardcore criminal Mayur Shinde or Shiv Sena MLA Sunil Raut. What’s worse, the Kanjur Marg police registered only a non- cognizable (NC) complaint in the matter.

Mayur Shinde, against whom several criminal offences have been registered, is famous as the adopted son of Shiv Sena MLA Sunil Raut. Gunjal named Raut also in the matter, but the police kept his name out of the matter.

On June 15, 2016, Gunjal received several International calls (from + 344 and 8613724361876) on his mobile phone. The caller introduced himself as Prasad Pujari. Pujari suggested he should not complain against Raut and Shinde. When Gunjal asked who was speaking, Pujari said he should search his name on Google. He said Gunjal should go easy on Raut and Shinde. “I am his boss. If you do not take note of my suggestion, all that will be left of you is a photo on the wall.”

Prasad Pujari called more than 15 times in the day. Gunjal approached the Kanjur Marg police station seeking the registration of an FIR against Raut and Shinde, but the police registered only an NC complaint. Although Pujari clearly took the name of Raut, the police did not mention his name in the NC complaint.

“I will approach the Bombay High Court soon to register an FIR against Prasad Pujari, Sunil Raut and Mayur Shinde. Mayur Shinde is freely roaming around in the area. Police know everything but are avoiding arresting him,” said Gunjal.

Who is Prasad Pujari ?

Former member of Kumar Pillai gang. Once upon a time he controlled the Kumar Pillai gang. He is believed to be hiding in some South-East Asian country. After arrest of Kumar Pillar in Singapore Pujari has started outsourcing his operations for killings and extortions. On June 28, 2016 Kumar Pillai deported Mumbai from Singapore. “I will collect information,” said Ashok Dudhe, spokesperson, Mumbai police.

Police save gundas not a publice