Home Entertainment Meeruthiya Gangsters : A great creation by a dynamic and young debut... 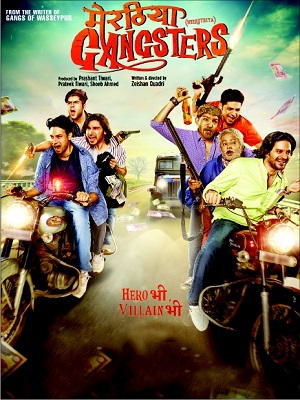 Zeishan Quadri’s directorial debut film Meeruthiya Gangsters is inspired by the high number of extortion cases in the city of Meerut. The film is all about Nikhil and his five friends, who turn kidnappers. All these friends are Meerut based and are in search of job and also willing to start their own real estate business after completing their college.

It all started with a trail of one kidnapping followed by another and thus making it a habit. The role played by Nushrat Bharucha is really applauding and people will not forget to appreciate her work. Zeishan Quadri was recognized first for his famous character role ‘Definate’ in Anurag Kashyap’s Gangs of Wasseypur-2. Expecting him in this film like his earlier is of no use, as the movie misses giving this treat to audience.

The film is a great blend of good screenplay, charters and situational comedy. It reveals the actual Gundaraaj prevailing in western part of Uttar Pradesh and shows how beautifully director has understood the culture and trends of that region.

The weird characters will surely make you laugh and will also give you a tinch of fear. It’s a great thriller and it will go places and viewers are definitely going to love this film. The film also has heavy weight champion in comedy Sanjay Mishra and Mukul Dev playing as a funny cop.

Verdict: The theme matches with the tastes of current generation and it’s a great creation by a dynamic and young debut director Zeishan Quadri. It’s a must watch movie.