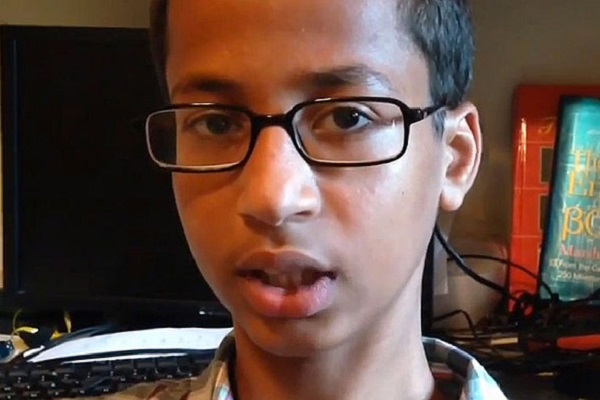 AHMED Mohamed a 14-year-old student went to his High School in Texas, with so excitement, he wanted to show his teacher the digital clock he had made from a pencil case. But he was punished after the teacher called police and he was arrested. In the end, however, the incident brought Ahmed Mohamed, who plans to become an engineer, an invitation from Obama and one from Mark Zuckerberg to stop by Facebook.

According to media reports, Mohamed Elhassan Mohamed, on Monday went to his high school in Irving, Texas, to show his teacher a digital clock which he had made from a pencil case. Shocking, an English teacher instead of praise it’s project, called police and get arrested him.

Speaking to media Mohamed said, ‘I built a clock to impress my teacher but when I showed it to her, he thought it was a threat to her. Police arrested me and they told me that I committed the crime of a hoax bomb, a fake bomb.’

After news spread on media American President Barack Obama invited Mohamed twitting, “Cool clock, Ahmed. Want to bring it to the White House? We should inspire more kids like you to like science. It’s what makes America great.”

And Facebook founder Mark Zuckerberg invited Mohamed to stop by his company in a statement posted on his page. “Mohamed, if you ever want to come by Facebook, I’d love to meet you. Keep building,” Zuckerberg wrote.

Mohamed’s father Elhassan Mohamed has ran for president of Sudan earlier this year. Mohamed repeatedly told police that what they believed to be a hoax bomb was actually a clock.

Later, police announced that Mohamed will not be charged.