Home Others Seminar on the influence of Indian Navy in IOR 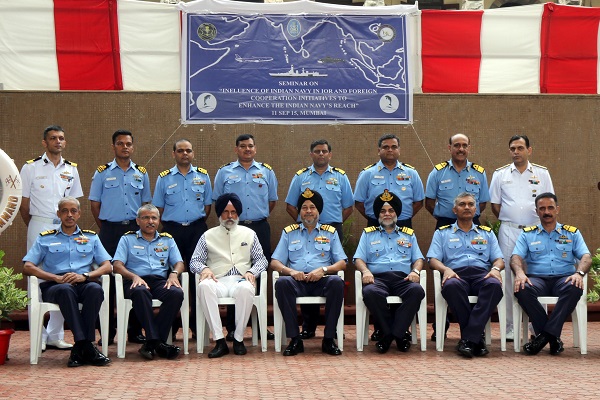 A Seminar on “The Influence of Indian Navy in the Indian Ocean Region and Foreign Cooperation Initiatives to Enhance the Indian Navy’s Reach” was conducted today at INHS Asvini Auditorium in Colaba. The Seminar was attended by officers from the Western Naval Command as well as research scholars and staff of the Maritime History Society and Mumbai University. Vice Admiral SPS Cheema, Flag Officer Commanding-in-Chief Western Naval Command was the Chief Guest for the event and delivered the Opening Address. Shri KC Singh, a renowned expert in international affairs and ex-Ambassador to UAE and Iran, delivered the Key Note Address.

In his opening address, Vice Admiral Cheema outlined the diplomatic role of the Indian Navy especially in the strategic arena of Indian Ocean Region. He brought out the recent achievements of the Navy in its foreign cooperation endeavours and brought out the need for further engagement with our maritime neighbours. He apprised the audience about the numerous requests being received from Navies across the world to conduct exercises with the Indian Navy, clearly indicating a shift in the India’s standing as a stabilising factor in the region.

Delivering the Key Note Address, Shri KC Singh, brought out current developments such as formation of soft alliances in the Indian Ocean region. He also emphasised the significance of soft power projection by the Indian Navy. Apprising the audience on the significance of visits of Naval Ships to foreign countries he explained the role Navy plays in achieving our strategic and national aims overseas.

The seminar comes soon after the Navy’s Operation “RAHAT” in war-ravaged Yemen, which witnessed the daring evacuation of a large number of Indian and foreign nationals from the battle-zone onboard the Navy’s ships. The Seminar highlighted the growing influence of the Indian Navy in the Indian Ocean and its ability to undertake a wide variety of missions and tasks at extended ranges.

The speakers at the seminar represented a broad cross-section of the Navy, ranging from mid level officers in the field to Flag Officers at the planning and policy level in Naval Headquarters. Other Naval Commands and the Coast Guard were also represented to provide a balanced perspective. A number of papers were presented, covering various strategic and geo-political issues affecting the maritime security calculus of the Indian Ocean Region and proposing steps for the Indian Navy to expand its reach. Developing cooperative maritime security frameworks, handling non-conventional threats such as terrorism, piracy, human trafficking and gun-running, enhancing the effectiveness of the Indian Ocean Naval Symposium (IONS) and dealing with extra-regional maritime forces were some of the major issues deliberated.

While the Navy seeks to expand its traditional role of providing hydrographic survey, surveillance, disaster relief and training assistance to our Indian Ocean neighbours, new avenues of foreign cooperation such as warship and aircraft design and construction, to enhance the maritime capability of Indian Ocean littoral states, were also notable discussions.

There is no denying that the Indian Navy remains one of the most potent tools of the nation’s foreign policy. The International Fleet Review scheduled at Visakhapatnam in Feb 2016 is a much anticipated event, taking place after a gap of 15 years and would see participation from a large number of friendly foreign navies. This Seminar, therefore, served as an appropriate precursor to the forthcoming events associated with the International Fleet Review, and has set the agenda for taking our foreign cooperation to the next level.