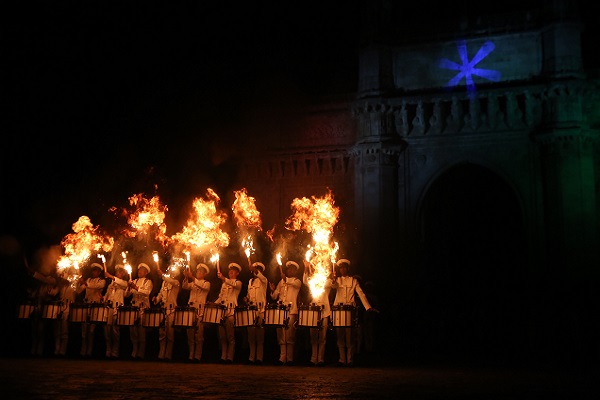 WESTERN Naval Command (WNC), of Indian Navy, celebrated Navy Day 2015 with a Beating Retreat and Tattoo Ceremony at Gateway of India around sunset last evening. Chennamaneni Vidyasagar Rao, Governor of Maharashtra, was the chief guest at the ceremony and Vice Admiral SPS Cheema, Flag Officer Commanding-in-Chief Western Naval Command was the chief host for the evening. The ceremony was witnessed by a large number of senior invitees.

The ceremony of ‘Beating Retreat’ has origins in the early warfare. It was sounded everyday as a signal to the troops to disengage from combat as daylight faded, ordering them to withdraw to the confines of their encampment for the night. Since then, the ceremony of ‘Beating Retreat’ has become an integral part of the military traditions of India. The custom of ‘Tattoo Ceremony’ is held after sunset and encompasses beating the drums within the billeting, to order the troops to proceed to their quarters. 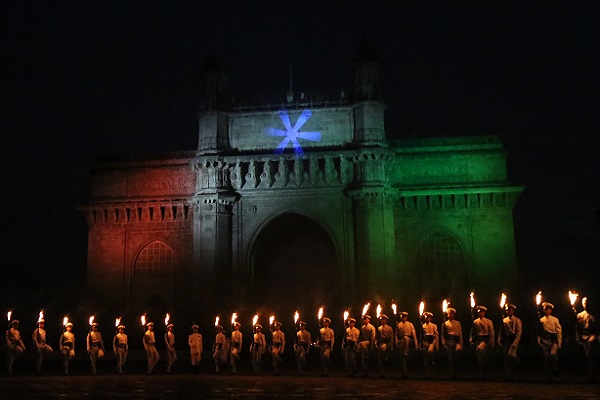 The Continuity Drill performance by the ‘Nauveers’ of Western Naval Command is spectacular and mesmerising, as the entire drill sequence is executed without a single word of command. The purpose of performing drill in immaculate turnout, is to inculcate essential qualities of endurance, uniformity, military bearing, pride in one self, implicit obedience of orders and above all to instil unity of purpose and Espirit-de-corps.

The Naval aviators with their flying machines showed skilful performance. The special heliborne operations were undertaken by Chetak, Seaking and Kamov as offensive operations displaying speed, surprise and stealth.

During Marco Ops demo, the spirit and courage of marine commandos were displayed which they have exercised over the years viz. hooked and slung from the rope exhibiting physical strength and fighting spirit.

The young cadets of Sea Cadet Corps performed a Hornpipe Dance which is a fitness regime for seafarers in the confines of their decks. The young cadets displayed energy, discipline, rhythm, coordination and enthusiasm during the enchanting dance.

The Indian Navy, observes December 4 as ‘Navy Day’ to commemorate the glorious victory of the Indian Navy during Indo – Pakistan war of 1971 and to salute the valiant heroes who bought the country this moment of pride. Executing ‘Operation Trident’ to perfection on the night of 3/4 December, the Indian Navy launched an attack on the Pakistani port of Karachi. Operation Trident saw the first use of anti – ship missiles resulting in sinking of three Pakistani vessels and setting ablaze of the Karachi oil refinery. In the run up to Navy Day 2015, various celebrations are conducted in the City of Mumbai and other Naval Stations.