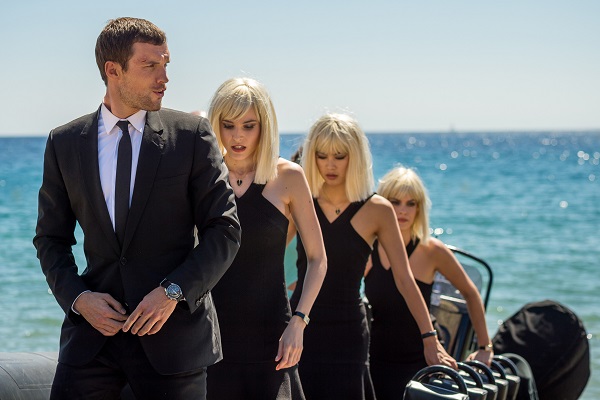 EUROPACORP celebrated the reboot of “The Transporter” franchise in style Tuesday night with a premiere and party at the Playboy Mansion, replete with dancers and Playboy bunnies. Despite stepping into the shoes of an iconic action hero, Ed Skrein said he wasn’t nervous and approached his role in “The Transporter: Refueled” like he does any other.

“I approached it the same way I approach my independent movies for $300,000,” Skrein said. “I try to be as honest as I can in each situation and live each moment how the script dictates, not how previous movies have been, not how anybody else would have done it, not with the thought of it being a franchise.”

Starting fresh and rebooting the franchise was exciting, said Loan Chabanol, who plays a femme fatale that requires Martin’s skills to exact revenge on a Russian mobster.

“You can’t really look at what’s been done,” Chabanol said. “It’s a new film, it’s a new cast, it’s a new everything. New is exciting.”

The movie played on a projector in one of the rooms of Hef’s manse with a spread of Hershey’s chocolate, Wild Berry Skittles and wine. After the screening, dancers dressed like Chabanol’s character escorted guests to the other end of the house for the after-party. Attendees mingled around the famous Playboy Mansion Grotto and the private zoo, while the dancers performed again on a stage with impressively synchronized fog machines.

In addition to the “Transporter”-themed drinks at the bar (the best of which was The Transporter Mule), party-goers posed for pictures and videos with a wind machine that sent suit jackets, scarves and hair flying.