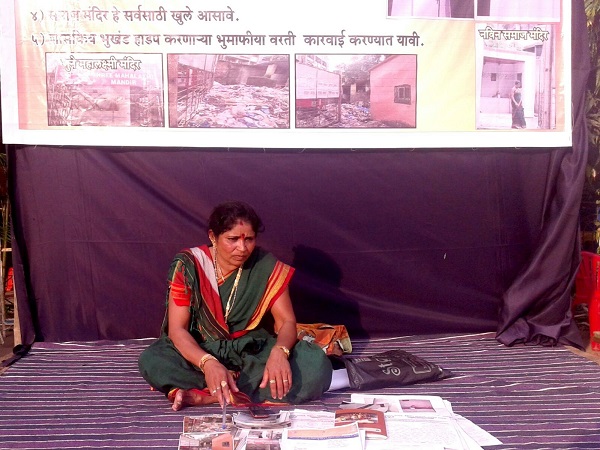 A woman lodged in Adharwadi prison in Kalyan is being tortured in an attempt to break her hunger strike, says a written complaint by her sister to police officials.On December 14, Shakuntala Prakash Pawar complained in writing (copy with ABI) to the Deputy Commissioner of Police (DCP) and the Senior Inspector of Police of Bazarpeth police station against the jail authorities.Shakuntala says that on December 14 she met her sister, Aruna Haresh Nagdeo, in Adharwadi jail and was told that the jail authorities were using inhuman techniques to end her fast.

“Aruna alleged torture by staff of the jail. She was beaten. On Sunday evening a female constable assaulted her and tried to forcibly put food in her mouth. There are injuries and pale blue marks on her face. Aruna also alleged that she has not been taken to hospital for medical treatment,” said Shakuntala.

On December 13, ABI (abinet.org) put up the report ‘Ulhasnagar woman sits on hunger strike inside Kalyan Jail over illegal activities by Congress councillor’.

The 42-year-old Aruna has begun a hunger strike inside Adharwadi jail seeking action against Congress Councillor Rajesh Wadharia and NCP Councillor Rekha Thakur for illegal construction.Aruna had been twice arrested by the police when she tried to sit on a hunger strike in front of Ulhasnagar Municipal Corporation (UMC).

Aruna is a resident of Sangam Colony, Ulhasnagar. She is complaining against illegal construction allegedly done by Rajesh Wadharia near Lajwanti Wadhwa Dharmshala. Wadharia allegedly damaged the Mahalaxmi temple and constructed a Samaj Mandir Hall as a one-plus-one RCC structure without proper UMC permission. Aruna alleged that Wadharia wants to usurp the temple land. It is possible because of he is attached with Ulhasnagar based notorious company Konark Infrastrucre Ltd (KIL). By short name ‘KIL’ indeed Konark is killing all rules and regulations of city.

After first making complaints, Aruna sat on a hunger strike twice in front of the Ulhasnagar Municipal Corporation (UMC). The police arrested Aruna, claiming her strike was illegal and without permission and produced her before an Ulhasnagar court. The first time she was granted bail, but on December 12 she refused bail and wished to go to jail. On Saturday she was sent to Adharwadi jail, where she started a hunger strike to draw the attention of the UMC authorities and state government to the issue.

“Despite physical assault by jail authorities my sister has not ended the strike,” said Lajwanti. Kalyan court has also directed to Adharwadi Jail administration to take Aruna for medical examination. A call to Adharwadi jail brought denial about the incident of assault. The person who took the call refused to divulge his identity. “Neither is Aruna on a hunger strike nor has anyone assaulted her,” he said.

I am deadly against all the illegal activities especially illegal constructions: Rekha Thakur

In her complaint Aruna has also alleged on Rekha Thakur, who is Corporator from same Panel (113). But clarifying her side Rekha said, “I have elected as the Corporator of this Panel on January 2015. This concerned Samaj Mandir Hall was sanctioned and was under construction by UMC long before I was elected. I am a social activist since last years and I am deadly against all the illegal activities especially illegal constructions. I have been issued two letters (Copy available with ABI) to UMC Commissioner Manohar Hire requesting him to take action against the all illegal construction happening in my ward and Panel. So I am no way to concerned with any illegal construction in my Panel.”