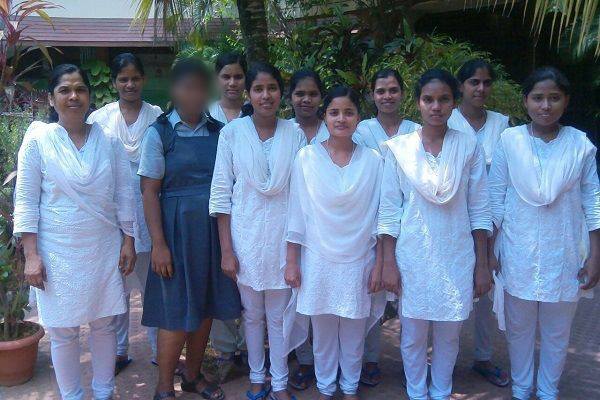 AKELA Bureau of Investigation (ABI) has blown the lid off shocking happenings at the Handmaids of the Blessed Trinity orphanage and convent in Vasai after an in-depth sting done by an undercover woman reporter. Now, another shocking finding is that the orphanage is involved in forcibly converting its own students to Christianity.

ABI’s undercover reporter Seema Creado found that the Handmaids of the Blessed Trinity orphanage and convent in Vasai is converting its own students to Christianity. Despite being minors, the girl students are forcibly being made nuns.

Seema Creado came to know this through her daughter Tricia (14) in May 2015. Seema admitted Tricia in Vasai’s Sapodiwadi Madi Naka but one day she called from Formation House in Giriz area in Vasai (West). She said that the sister gave her a white saree to wear and forcibly made her study the Bible. Seema inquired with other girls and found that the sisters were forcibly converting girls and making them nuns despite it being illegal. As per law, a minor girl cannot be converted and made a nun.

Seema came to know that around 12 girls were forcibly being converted to be made nuns even though they were not ready for it. The girls belonged to Jharkhand and Orissa. The girls’ parents had admitted them in the Jharkhand and Orissa branch for better English speaking ability, but without their consent the girls were transferred to Vasai. Seema was also informed that Vasai-based sister Eliza had transferred Rs 50,000 to one Father James’ bank account in Orissa, for which the reason is yet to be known. One more shocking news was that one of the girl’s father was a Naxal operative in Jharkhand.

On January 1, 2015, all girls created a ruckus on the school premises as they were fed up with the sisters’ physical assaults and oral abuse. They were starved for days and beaten mercilessly for failing to recite Bible passages. The girls were forced to consume buffalo meat and “paraded” before potential donors.

The girls tried to flee from school. After valiant efforts by Seema, they were sent back to their homes by train.

“Twelve girls were forcibly being made nuns, including my minor daughter. One day girls created ‘Hangama’ in school and tried to flee. However, I spoken to the sister. I convinced her and the girls were sent back to their native places through train,” said Seema.

It is bad, but do you prevent this from happening.

The brutal face of devils…!

Very bad news.Authority has to stop.

Hindus have been taking thus lightly. VHP will activate and will not allow the spread and maltreatment any more.

It’s mistake on part of Hindus. They should also work in that directions. All the Hindu temples should contribute or create permanent corpus for the same as being created by other well known converters, who are settled in this religious business. Instead creating a khan’s and sadhus, there should be army of dedicated youngster, to do this job. Our reach Hindu to contribute and intellegeia to work out the ways and means. No parasites please.

Christians are not allowed to behave like the above.
Being a true Christian is being christ like, following Jesus Christ example.

Obviously what happened to these girls, was not at the hands of Christians.

No one has legitimate reason to blame sinful acts on Christians, as Christians don’t do sin.

Ah, I was wondering when I’d see the “No True Christian” argument.

Islam on the other hand CAN’T honestly declare that statement as the worst Muslims in the world DO follow the exact example of their prophet…. Funny that.

Melissajayne when is the last time you did protest wrong doing of Church? or do you remember any Missionary or Church or Arch Bishop or any religious head of Christianity ever condemning wrong doing of their lot? Stop bull shitting.

You obviously are void of knowledge of what an actual Christian is.

N by the way the Vatican is a satanic cult & pray to different things.

Maybe you should come to grips that you have no idea what a Christian is, that would help you stop spreading LIES

Christians don’t sin…that’s a lie in itself. They sin all the time and are the biggest hypocrites as well.

Why was this not reported with the auauthorities …. plus why was her daughter sent to an orphanage … firstly this ngo is sounding more fishy …. the orphange runners should be jailed if this is true

Dear Seema, I can understand if girls are converted and made them to work as maids. Do you know how much wealth and properties convents are holding and you expect the forcibly converted to Christianity nuns are entrusted with responsibility of such institutions. Only you and people of your level of understanding can believe this.

It’s absolute garbage, spreading lies is not good.
Most of the world doesn’t have a clue what Christianity is based on, for starters this story would be in the trash where it belongs

I being a Catholic would like to request you that If you are sure about the happenings please report it to the authorities and get the people involved arrested don’t just put it on Facebook. I believe in secular India and not in forceful conversion. Please reply.

It is time for Shiv Sena to come forward and take notice of what is happening in our country under the name of religion and charity and teach a strong lesson to these people.

If not for the Christianity and Islam, the so called dalits would have been thrashed and bashed by the so called higher caste Hindus. These two Abrahamic religions have given dignity to these under priviledged via their religion. Which is a better religion is besides the point. In this context the Shiv Sena types of groups are fanatics and murderers.

chandran sukumaran you got great stereotypical knowledge, precisely on the other hand you forget to note that the missionary batches are using them as puppets to convert whole India. Just come out of all great things you wandering and try to learn and observe the things on the other side of coin. Because now the atrocities on the people is objectionable those culprits must be behind the bars. But the points you are raising in future and the insights of the Abrahamic religion if you consider both things are quiet contrast. Don’t ever judge and proclaim things with Glimpse concepts.… Read more »

Another attack of evangelical attacks on Hindu society

They all should be reconverted and the orphanage to be warned, and if repeated, to be closed.

If this is the case, why it is not reported by any national news papers? What is anyway this ABI? Something similar to CBI? If you are true you should have the guts to prove it. Please don’t inject poison in the minds of people for heaven sake..

All Christians should be thrown out of India which is a Hindu nation.

First of all you should tell about Seema Creado. Actually she is former employee of the orphanage. There is some issue b/w orphanage & Seema Creado which is resulted in duel.

Converted from one nonsense to another, time to wake up and get on with your life!

In Kerala, a great number of girls from poor social backdrops are been forced to join in convents run under various congregation. Often they come from families with hardly any means for a 3 – piece meal or having 2 or 3 girls without any prospect for a marriage or living. Convents are better option for these poor girls, which the parish priests and nuns visit their family members to canvass them to be the immaculate sisters or servants of jesus. Since Vatican is aware of the steady erosion of “faith” and shorage of European nuns, however, Kerala can produce… Read more »

Immediately police should arrest the culprits

This is bullshit… a true Christian will never do this.. m a Christian.. but m against that.. Jesus told to follow him not Christianity.. n no human has rights to forcibly convert some other fellow…

Reality is this the way Christianity has spread. All over world you will find 99% of Christians have converted either by force or by money.

Mr vardadarajan this is not a debate between Hindu, Muslim & christinaty… n i personally don’t want to interfere in this issue.. my point is the ppl those are forcing is not a human, offcourse not a Christian… coz Jesus told to follow him as a person…not n e specific religion..hope u got my point..don’t pads unnecessary comments…

IMMEDIATE INTERVENTION FROM THE AUTHORITIES IS NEEDED TO STOP THIS UNLAWFUL CONVERSION .

What the fuck is the local government agencies upto is the first question; are they even bothered about human rights violations? The Amnesty International went about organizing an anti-india campaign in Bangalore, and they were book on sedition charges couple of days ago; after all the goddamned convent is full of them converted from Hindu and that is what they are paid to do by the frigging organizations funding them. First and foremost the government should cancel their licenses, shut them down human right viloations, and kick them fucking morons out of the country. Period.