Home Others Vikrant Memorial at traffic island near Lion gate 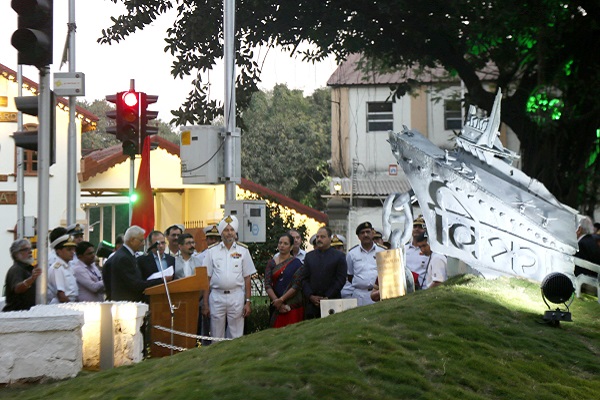 A Vikrant Memorial was unveiled by Vice Admiral SPS Cheema, Flag Officer Commanding-in-Chief, Western Naval Command and Ajoy Mehta, Municipal Commissioner, Municipal Corporation of Greater Mumbai on 25 January 2016. The memorial is located on a traffic island at K Subash Marg, opposite Lion Gate, Naval Dockyard (Mumbai). Commodore Medioma Bhada (Retired), of the Vikrant Memorial Forum and an ex-pilot of Vikrant explained to those present that the memorial is a sculpture created with pieces of metal recovered from the ship-breaking yard and belonged to the decommissioned ship.

The memorial is a living testimony of deep gratitude to a majestic ship from all those who served on her as she created the legacy as pioneer of Indian Navy’s Aviation Arm. Speaking on the occasion Vice Admiral SPS Cheema said that the first aircraft carrier of the country Vikrant laid sound foundation of air operations for the Indian Navy. The valuable lessons learnt on her decks are enshrined in the organization of Indian Navy enabling the Navy in fluently integrating the recently inducted aircraft carrier INS Vikramaditya.

The first aircraft carrier of the Indian Navy was commissioned in 1961 as INS Vikrant and after 36 years of glorious service to the Nation the carrier was decommissioned in 1997. During this period, she actively projected India’s Sea Power in the Indian Ocean region. The ship saw action in the operations in the Bay of Bengal during the 1971 Indo-Pak War and played an instrumental role in the defeat of Pakistan that led to the creation of a new Nation. It was owing to her presence in the Bay of Bengal, that the Country’s promulgation of contraband control was effectively enforced by the use of carrier based air power.

On the occasion, Commodore Bhada (Retired), said that despite the concerted efforts of the Indian Navy, the State and Central Governments to preserve Vikrant as a Museum, she could not be retained and finally had to be sent to the ship-breaking yard in 2014. He expressed that Vikrant Memorial Forum and the Mumbai Citizens Group is indebted to the Municipal Corporation of Greater Mumbai for providing a most appropriate venue and facilitating the setting up of the Vikrant Memorial. He acknowledge the unstinted support of the Western Naval Command, whose continuous involvement, has made the venture possible to create and sustain thereof. He also thanked Mazagon Dock Shipbuilders Limited for their sponsorship and assistance. This project was conceived and steered by Commodore Medioma Bhada (Retd), who had donated parts of the ship Vikrant for this sculpture. The sculpture has been designed and crafted by Arzan Khambatta, a sculptor who is known to bring metal to life.

What about fire in ASD Mumbai building in 2012.