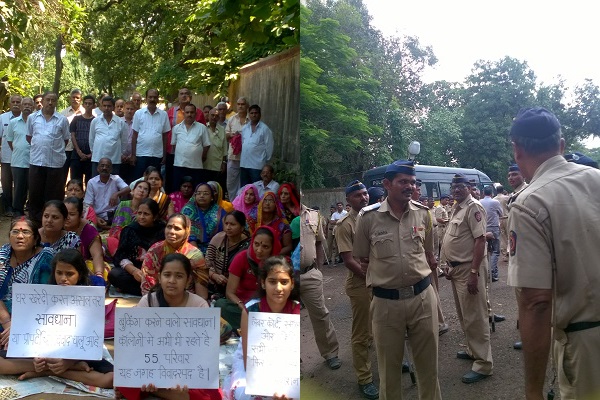 ABI IMPACT: It is time for Runwal builder, one of the most notorious construction enterprises in Mumbai, to face the consequences of its actions. As many as 15 buyers have cancelled their flat purchases after ABI exposed illegalities and inhuman acts at the builder’s Kanjurmarg (West) project. Sources also revealed that more than 53 buyers were in the queue to cancel their bookings.

ABI reports, dated May 23, 2015, and June 4, 2015, highlighted the irregularities in the Runwal project (“Runwal builder cuts water and power supply to occupy land, goons torture residents and molest girls”) and the protest held at Housing Minister Prakash Mehta’s residence over terror and torture by builder Subhash Runwal and the Parksite police.

The project in question is Runwal Forests at Kanjurmarg (West). There are 1,200 flats (earlier 800 flats) in 12 buildings spread over 14 acres. The project is being promoted by Subhash Runwal, chairman, Runwal Group. The project was launched in November 2013 and the expected date of possession is not clear. Runwal even changed the layout plan three times for the project.

“There is no transparency in the project. The builder changed the layout plan three times. Thanks to ABI for exposing developer’s inhuman and cheater face,” said a customer who recently cancelled his apartment.

15 customers who had invested in the project cancelled their bookings claiming they had lost faith in the builder. 53 investors are in the process of doing so, having applied for cancellation of their apartment deals.

Protest by residents and customers

Seventy-seven families living on the plot are angry with Runwal builders for various reasons and they staged a silent protest on the occasion of re-launch of the project last week.  The protestors covered their mouth with a black ribbon during a demonstration. They requested people not to book flats in the project as Runwal builder was a cheater.

“There is a collaboration between the builders, politicians and Parksite police station, which has resulted in the biggest land development illegalities here. So we decide to protest against the builder.” said a investor who applied for cancellation.

Refuting the allegations, Lucy Roy Chaudhary, director, sales and marketing, Runwal Group, said, “It is true that 15 buyers have cancelled their apartment due to various reasons not ABI. But 125 new customers have booked in the project. There was also no protest by residents on the day of the re-launch of the project.”

Runwal, Nirmal, Neptune n many more ….wen is govt going to wake up to their atrocities……

All Runway projects are big loot by subhash and Sandeep RunwaL. Before buying any property at Runwals check with old customers.
I am also one of the victims of Runwals the baxtaxd

Runwal and govt are hand in glove

Also other big names starting with lo and ind are same,cheating people.

Great job, ABI! The cynic in me worries for your safety, please be careful. People who are reading this, ABI needs your help and protection. As much as you applaud their virtuous acts, don’t disappear when they might need your help to stand against goondas like Runwal and those corrupt cops.

Runwal builder is a complete crook. People who booked at Greens are suffering too from indefinite delay.