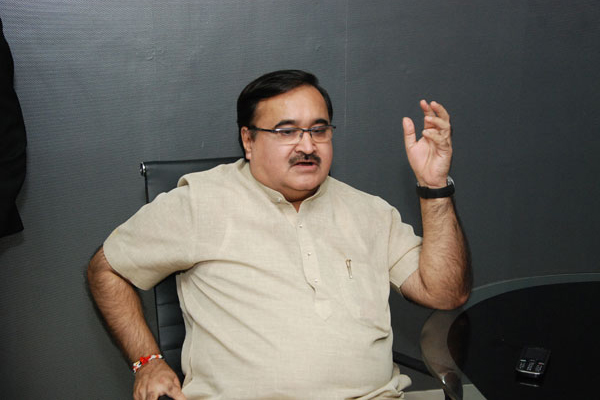 THE residents of Birla colony, Bhandup (west) have organised a ‘Morcha’ at Bharatiya Janata Party (BJP) leader and Housing Minister Prakash Mehta’s house against terror and torture by infamous builder Subhash Runwal and Senior Inspector of Parksite police station in Vikroli. Residents are alleging that they are being tortured and terrorised by Runwal builder’s goons and Senior Inspector Suresh Shankar Sakpal is favouring them by pocketing huge bribe.

On June 3, residents submitted their letter (copy available with ABI) to Prakash Mehta and Assistant Commissioner of Police (ACP) informing them about the protest on June 5.

After the news was published in ABI (abinet.org), shameless builder Subhash Runwal increased the torture and terror on residents. Their goons demolished few parts of colony. They abused and threatened residents in the name of Prakash Mehta.

The project in question is The Indian Smelting & Refining Company Limited, Bhandup (west).There are 77 flats spread over 14 acres.

According to news Runwal builder has disconnected the electricity and water supply to Birla colony at Bhandup to occupy the land. The builder has also appointed goons-Amit Bhogale, Krishna Lad, Rajesh Pujari and Bhau Korgaonkar – to torture the residents and molest the women.

Subhash Runwal, the owner and chairman of the company, had purchased The Indian Smelting & Refining Company Limited, Bhandup (west) on August 1, 2012. The company, which was owned by the industrialist Birla group had 800 workers, including office staff. On December 2, 2012, Subhash Runwal made a Voluntary Retirement Schemes (VRS) offer of Rs 50 lakh and an apartment to each worker and sought the workers’ signature on the agreement. As the workers were not educated, they believed their union leader M A Patil and signed on the agreement paper. No one told them that what the contents of the paper were. Workers were shocked when Runwal began distributing only between Rs 6 lakh and Rs 16 lakh under the VRS to the workers.

The colony residents have been facing various kinds of tortures and insults. Runwal builder has deployed security guards and goons at the entrance of the colony. The residents allege that these goons are not allowing milk, newspapers, ration, autorickshaws and relatives inside the colony. Even sick people are stopped at the gate and ask to go home on foot. This is happening even though the residents’ homes are more than 1km away from the gate. On several occasions the goons have molested girls and women. They pass lewd comments at them every day.

The helpless residents approached the Small Causes Court against power and water cutting. On September 2014, the court ordered that the situation be maintained as it was and that power be restored. But Runwal does not care about the court order. The power cuts continued. Students could not study for their exams because of this. In January, residents also filed a contempt of court petition and also sought action from court under MESMA.